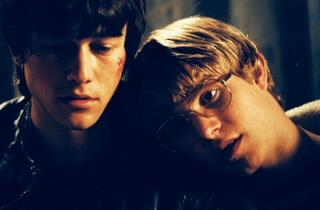 Gregg Araki has directed his most mature film to date, in the haunting and disturbing Mysterious Skin.

"What I really wanted to do with this film was have it devastate people in the same way Scott Heim’s book did to me when I first read it," director Gregg Araki says of his controversial new movie Mysterious Skin. "I’ve never encountered a story like it. I get sent a lot of scripts and books and stuff, and there’s really no other story that has moved me, and made me want to make it into a movie, the way this story did."

Mysterious Skin is the eighth feature film from the former bad boy of the 90’s new queer cinema, whose works includes the HIV-positive road movie The Living End and the bleakly beautiful teen drama Totally Fucked Up. Thanks to recent attempts by the religious right to have the film banned here in Australia, its subject matter, an exploration of the devastating impact of child abuse upon two young boys, is already well known.

Araki acknowledges that the film’s sensitive approach to a difficult subject marks it as his most mature work to date.

"People walk into Mysterious Skin with certain expectations of what a Gregg Araki movie is going to be like and they’re surprised; its very unpredictable and not what you think it’s going to be. I appreciate its difference; it’s a big departure for me, but at the same time it like totally fits in with my oeuvre," the Californian film-maker laughs. "There’s so many themes and relationships and stylistic flourishes in common with my other movies, and definitely its sensibility."

Araki has always made films about outsiders, and has also long been fascinated by the grey areas of human sexuality. He explains that this fascination stems from cinema’s ability to be a truly intimate artform.

"Cinema allows you access to these people’s most private moments. Unless you’re having sex with somebody you don’t really get that moment of intimacy with them, and I think that it’s in those private moments that the character is really revealed," Araki says. "I find it really fascinating, the aspects of character that come out in these moments when people are literally naked, but also emotionally and psychologically naked as well."

Ironically, it was the intimate nature of Mysterious Skin that caused Araki to delay making the film for almost ten years, and which has also resulted in its coming under attack by Australian wowsers.

"One of the reasons it took me so long to make Mysterious Skin was that I was trying to figure out a way to shoot the scenes involving the eight year old boys so that the child actors playing them could be protected from what the movie was about," Araki says earnestly. "I didn’t want to make the film without those scenes, because they’re obviously so crucial to the characters and the emotional arc, they’re why the story is as powerful, but I didn’t want to have these child actors, and fuck them up in some way by exposing them to this adult subject matter."

Thanks to judicious cinematography and editing, he says managed to shoot the film he wanted without exposing his young actors to risks.

"Basically the kids knew it was a film for grown-ups, but they didn’t really know the story or the relationships. I got their performances kind of bit by bit; it was frequently just ‘You’re scared and you’re looking this way’. When I saw the film in Venice, the way their performances are so nuanced, and very riveting, I realised they both did such an amazing job."